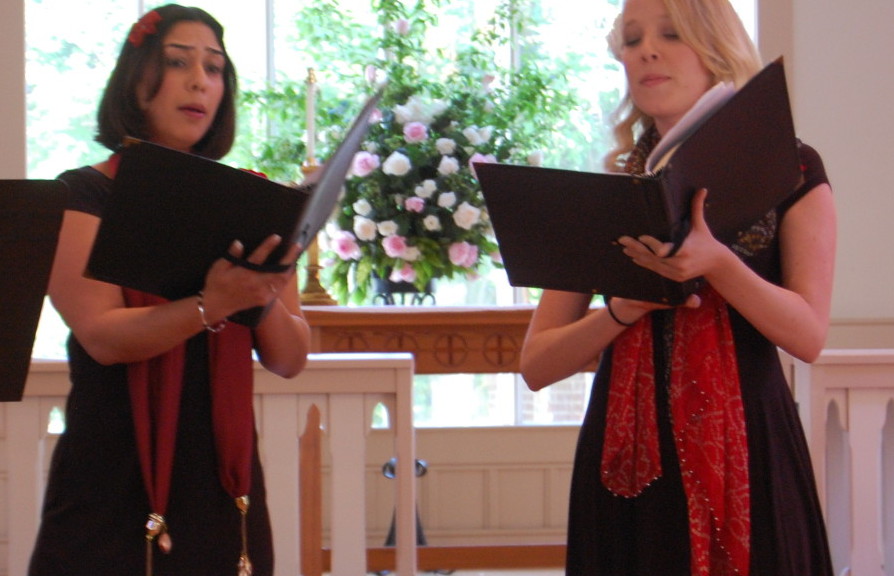 Due to the ongoing COVID-19 pandemic and necessary social distancing measures, our spring concert has been POSTPONED until further notice (hopefully sometime in June, but the situation is still fluid).  The Richmond Philharmonic Beethoven program has also been rescheduled to November 2020.  More information will be made available as the situation develops.

Our Spring 2020 performance is a collaboration with Jefferson Baroque presenting Giacomo Carissimi’s Historia Divits, a dramatic oratorio on the parable of the Rich Man and Lazarus.  We will also perform Paul Mealor’s setting of The Beatitudes, as well as a new trio sonata arrangement of Chiara Margarita Cozzolani’s O quam bonum es by Raphael Seligmann.

The Chorale will also be collaboration with the Central Virginia Masterworks Chorale and the Richmond Philharmonic Orchestra for a performance of Beethoven’s Ninth Symphony!   For more information, visit http://www.richmondphilharmonic.org/.

Our 2018-2019 season kicks off in November with War and Remembrance, a program honoring the centennial of the end of World War I, featuring Gerald Finzi’s Requiem da Camera as well as music by Byrd, Janequin, McDowall, and others.

In July 2018, we performed in collaboration with Viola da Samba, a European early/Brazilian music trio, and presented the North American premiere of Jean Kleeb’s Missa Brasileira

Our Spring 2018 Concert, “Southern Harmonies,” featured music from composers who were born or worked in the southern part of their home countries, from south of the equator or “south of the border,”  or were inspired by the American Sacred Harp tradition, including works by Reger, Higdon, Araujo, Padilla, and others

Our Fall 2017 concert, Light in the Darkness, featured Monteverdi’s “Beatus vir,” a Telemann motet on “Ein feste Burg,” Eric Whitacre’s “Sainte Chapelle,” and music by Byrd, Bruckner, Tallis, and others.  We enjoyed collaborating with Richmond-based period instrument ensemble Jefferson Baroque for these performances!

Choral Evensong at All Saints

On February 26, 2017, the Richmond Concert Chorale partnered with the Adult Choir of All Saints Episcopal Church to offer a service of Choral Evensong, with music by Roland Martin, Rachel Aarons, Steven Sturk, and others. 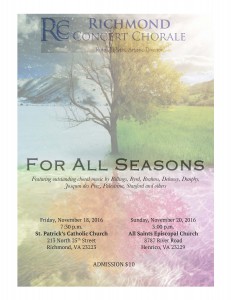 Fall 2016 Program: For All Seasons

Please join the Richmond Concert Chorale for our fall concert, For All Seasons, a program celebrating sacred and secular seasons and cycles, featuring music by Brahms, Byrd, Debussy, Josquin, Stanford, and other classics alongside music by living composers including Melissa Dunphy, David Carpenter, and Jackson Hill. 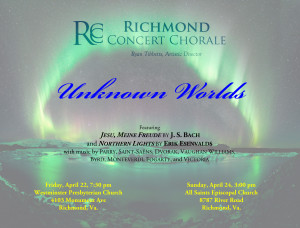 The Richmond Concert Chorale concludes its 20th Anniversary Season with a program that  features J.S. Bach’s motet Jesu, meine Freude as its centerpiece and draws on music from the Chorale’s past (including Victoria’s O quam gloriosum, performed at RCC’s first performance in 1995, two of Dvořák’s Songs of Nature, and Ralph Vaughan Williams’ haunting Silence and Music).  The program also features Ēriks Ešenvalds’s Northern Lights for chorus, tuned wine glasses, and handchimes, as well as music by Byrd, Parry, Saint-Saëns, Fogarty, and Monteverdi.  RCC’s Founding Director Bruce Stevens joins us on Friday as continuo organist for the Bach, and Scott Hayes, the Director of Music at All Saints, joins us on Sunday.

Fall 2015 Program: Music for the Soul 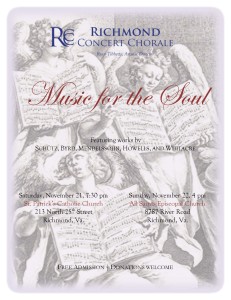 The Richmond Concert Chorale opens its 20th Anniversary Season with a program of music written by composers in times of turmoil, featuring William Byrd’s Mass for Four Voices, as well as music of Howells, Mendelssohn, Schütz, and Whitacre, all for unaccompanied chorus.

Spring 2015 program: For the Fallen

Friday, May 15, 7pm — Christ Ascension Episcopal ChurchIn the 150th year after the end of the Civil War, join us for a concert in memory of all who have lost their lives in wars, both here and abroad. The program features the haunting 2010 Requiem of Bob Chilcott (a former King’s Singer and very talented composer), as well as music of Eleanor Daley, Felix Mendelssohn, and Paul Aitken.

Fall 2014 program: In Praise of Music 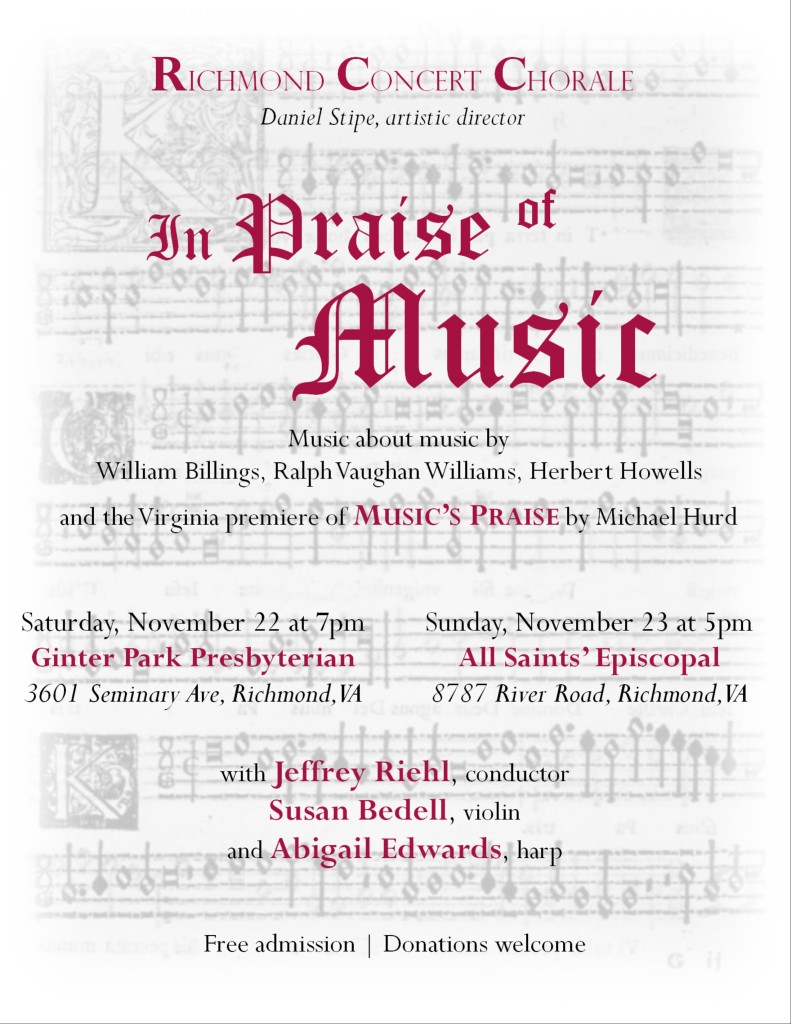 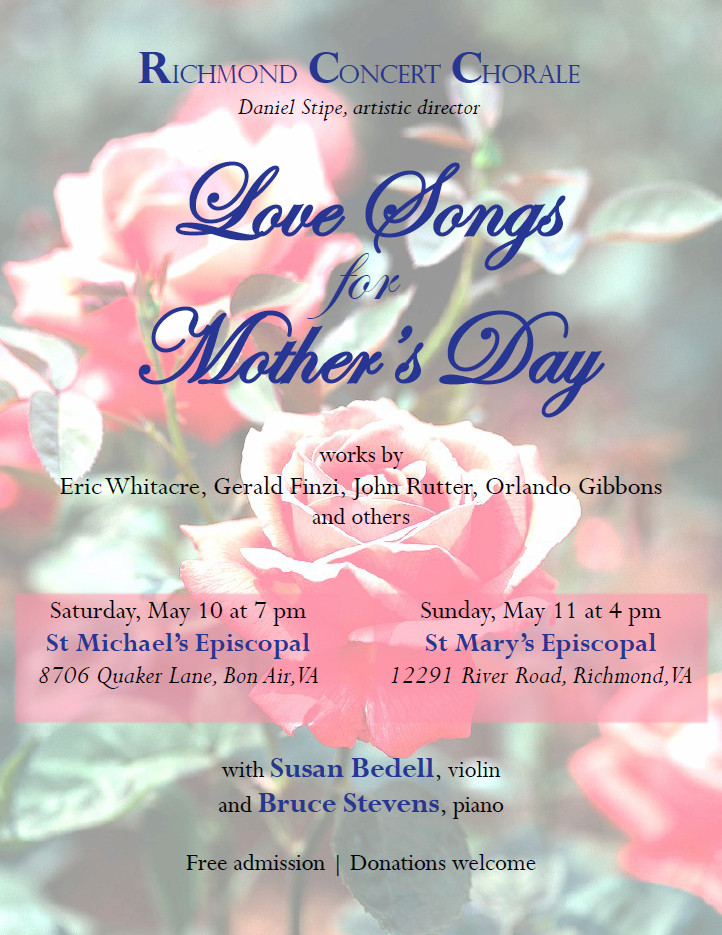 Welcome to the home of the Richmond Concert Chorale!